The fourth series of British science fiction YouTube series Time Agent that was originally due to be broadcast in 2013. Jaime Carroll is to continue his role as Agent Mortis, with Daniel Sherratt starring as a new main character. The series takes place 18 months after Series 3 and the Giant Flower Alien massacre which, consequentially, concluded with Dartchester now having time cracks all over the city, meaning that anything can come through. Agent Mortis has to create a new team to continue saving the world from the alien menace.[8]

Carroll stated that he began work on Series 4, impromptu, approximately six months before "Judgement Day" was released, and he named it his "Top Secret Project", not wanting anyone to find out whether or not Series 4 was in production or not.[9]

Jon Gransden is due to return for work on the Visual Effects of Series 4.[10] He is also to continue his role as producer,[11] and is to direct the fifth episode of the series.[12]

Billy Treacy, executive producer of Series Three, has decided to work behind the scenes on Series 4, rather than act. [13] He is also writing an episode, as well as assisting Carroll with some, editing the series, continuing his role as executive producer,[11] and co-directing the fourth episode of the series.[12]

The writers for Series 4 are Jaime Carroll (episodes 1, 2, 3,[4] 6[7]), Billy Treacy (episode 4[7], co-writing episodes 1,[4] 6[7]), Akbar Sikder (episode 5)[3][4] and Britty Lea (co-writing episode 3)[4]. The addition of Sikder and Lea marks the first series that Carroll and Treacy have allowed other writers to write episodes of Time Agent. In the first, second, and third series, and the Specials, only Treacy and Carroll wrote episodes.

In Series 4, Jaime Carroll, Charlie Holliday, Daniel Sherratt and Andy Fowler will portray Agent Mortis, Jennifer Jones, Keith "Nidge" Cookson and Gabriel Messinger, respectively.[17] Carroll continues his role as a main character from the second and third series. Sherratt previously starred in Time Agent with a smaller role, a Nazi officer, in "Downfall ". It is stated that the two are not linked and Sherratt will be playing a completely new character. Charlie Holliday and Andy Fowler are completely new in the series of Time Agent. It has been confirmed that Mortis, Keith, Jennifer and Gabriel will all be members of the Dartchester City branch of the Time Agency.[18][19][20]

A casting call was posted on the site Starnow, looking for cast for Time Agent. The characters that are on the website are:

David Boskett is composing the music for this series.[22] There will reportedly be a track titled Revocate Animos in the fourth series of Time Agent,[23] along with many other tracks.[24]

It has been confirmed that one of the episodes is to contain 1960's soul music.[25]

A trailer was released at the conclusion of "Judgement Day". It featured Jaime Carroll as Agent Mortis, and Daniel Sherratt and Charlie Holliday as their new characters (although unnamed at the time).[8] A new teaser trailer is currently being created.[26]

A teaser trailer was also uploaded to YouTube on 21 May 2012, however it is currently unlisted. The only way to find the trailer is by finding a hidden link on the official Time Agent website. The trailer depicted Agent Mortis sitting down, supposedly about to interview Keith Cookson.[27]

Series Four was originally planned to consist of six episodes, following the first, second and third series'.[5][6][7]. The first three episodes were completed and were released as the series 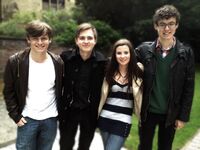 Retrieved from "https://dwexpanded.fandom.com/wiki/Time_Agent_(series_4)?oldid=40143"
Community content is available under CC-BY-SA unless otherwise noted.