Time Agent is a British science fiction YouTube fan series produced by Well Billt Productions. It is a fan series to the science fiction BBC television program Doctor Who. The program depicts the adventures of Time Agents—time travelling Agents known to fight against extra-terrestrial and terrestrial threats.

The original main character, Agent Liam, was the final companion of the Doctor (main character of Doctor Who) and, since returning to Earth, has fought against various enemies, and recruited many Agents for his assistance. He has, since, lost most of them

Time Agent is a fan-film series loosely based on the BBC science fiction series Doctor Who. Time Agent was and is still being created and produced by Jaime Carroll and Billy Treacy, who also stars as the main protaganists, alongside Allan Rafferty. Series One was released in 2008, then there were three Specials released in 2009, followed by Series Two in 2010 and Series Three in 2011/12.

Jaime Carroll originally had the idea for Time Agent, although, due to his busy schedule of the online drama series Spinning Jenny and some ITV series, was unable to do so at the time. Billy Treacy then offered to produce Time Agent for him. Treacy knew Carroll from their previous work as Treacy had guest starred him in his own series, Doctor Poo. Carroll eventually came into Time Agent as one as the main directors and writer's, and Agent Mortis.

In Series One (2008), Agent Liam, the leader of this Time Agency branch and a former Time Agent from Earth's far future, which was not a safe and well looked after enviroment for any human being to live on. Agent Liam traveled back in time to the 21st Century with the Doctor and then lived a life there, while leaving Agent Mortis (Jaime Carroll) to go mad and get locked up in the Mortis Code. The rest of the East Region Time Agency Branch are Ben the Gunman (Harry Williams), second-in-command and weapons officer, Dan the Cyborg (Sebby Treacy), who Liam transformed into a cyborg after he was killed, and newcomer Danny the Rookie (Matt Williams). A running mystery to the series followed on from the fact that Agent Liam could only remember the previous year of his life and his instinct told him that the answer lies inside the Fob Watch. Throughout the series, the team found themselves fighting many aliens; from the Chainsaws to the CyberKuio to the Flower Aliens. Agent Liam would regularly check on the Mortis Code - a mysterious computerised element that was seen continuously running on his computer. In the Series One finale, it is revealed that the evil Agent Mortis, played by Jaime Carroll, was trapped in the Code and stormed the neighbourhood, hunting down each Team member and picking them off one by one. However, Dan the Cyborg had thwarted Mortis' plan and the team survived, leading up to an even greater battle where rookie Danny was killed and Liam left in the TARDIS.

In the 2009 Specials, Dan the Cyborg and Ben were left to run their Agency branch until Agent Liam returned, hinting that he had travelled with the Doctor and had found his long lost memories. The Specials also saw the introduction of Bob the Flower Alien (Matt Williams) who is the first alien member of Liam's Time Agency branch and became a regular character, often aiding the team when needed. The 2009 Specials also saw the introduction of Hannah (Eleanor Hadfield) who would later be revealed as Dan's sister, although it would appear that Dan is unaware of any existing relatives. By the end of the specials, the Zakatrons had launched their attack on the Earth but the Clone Army of Dan's attacked and defeated them, using "the key." Ben was killed off in the battle, further reducing the team to 3 members.

In Series Two (2010), at the beginning, we see Agent Liam and Dan the Cyborg working, with Liam not wanting any dead team members replaced. Series 2 also sees the return of Hannah, who is still angry at Liam for taking her brother away. Soon Dr. Robin Turner (Allan Rafferty) comes to help Liam with a Flower Alien investigation. It is revealed he was once working for the Time Agency in Cardiff and that his team was murdered, soon revealed to be Agent Mortis on a CCTV camera. This was later revealed to be one of the Flower Alien's created by the Executive of Vision X Industries (in Series 3). Bob the Flower Alien dies after saving Robin from a rabid Flower Alien, leaving another deceased member. Bob is soon replaced by Robin. After two adventures, Bob is replaced with Agent Mortis, who returned and helped the team defeat the Venators. Robin then returns in The Musical but swears he will get revenge on Mortis. Liam's ex-girlfriend Katrina Mills (Laura Daykin) returns with The Zakatrons and tries to open up the centre of the Earth. Katrina is shot by Liam. Dan finds out about his past before he was a cyborg but is shot while learning it. He then fades away in Mortis' hands, saying goodbye to him and Hannah. It is then revealed that the Zakatrons plan to use Dan to unlock the Sun Destroyer because he is half-human. Though Liam sees that Dan is crying as he is being dropped into the centre of the earth showing that he is now full-human as a full-human has emotions. This causes The Zakatrons to die along with Dan. Liam, Robin and Mortis then carry on protecting the Earth in Dan's honour. 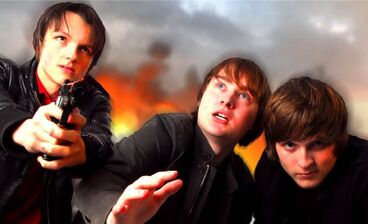 Series Three (2011-12) featured Agent Liam, Dr. Robin Turner and Agent Mortis still in the series and featured Flower Aliens with a new look, now more menacing. It featured new characters such as The Contact and also featured a Street Gang. Series Three also featured a new villain called The Executive who was last seen in "Earth's Guardians" (as a Time Agency Representative). The Executive's plans are to rule the Time Agency for years and years, with the God of the Flower Aliens leading him every step of the way. When Judgement Day finally came, the Executive showed the team his power to re-spawn when killed. He shot himself one final time, and is yet to be seen again. The giant Flower Alien was still attacking Dartchester, however, so Agent Liam flew Colonel Radcliffe-Naismith's Zakatron ship right into the creature, killing it but also destroying the ship in the process, making everyone believe that Liam had been killed. Robin left Dartchester to travel the world, after realising that there was nothing left for him there. Agent Mortis later revealed that his Vortex Manipulator picked up traces of a time jump, meaning that Liam was still alive but travelling away. Agent Liam's final request to Mortis was that he is to "follow in [his] footsteps" - defending the world.

The series was cancelled due to the disappearance of Jaime Carroll. No Time Agent material has been released since the relaese of "Judgement Day", apart from four clips from the second episode of Series 4.

In March 2018, it was announced an announcement concerning the series was finally brought out... named #CountdownToJuly... it also concides with the tenth anniversary of the first episode, which was uploaded on July 27th, 2008.

In November 2019 Series 4 was announced under the new name "Divinity" and Episode 1 titled "A Traveller from an Antique Land" would be released 29th December 2019.

Time Agent has run three series, and a short series of three specials. The 4th series will be released in 2019/2020.

For more information, see List of characters in Time Agent.

There have been many characters in Time Agent, from the team itself to the enemies.

The theme for the first series encompassed fragments from the Torchwood theme tune, the result being popular.

The theme music for the second and third series is a track from the group Two Steps from Hell, called Sons of War. It appeared to be a very popular liking from the fans and viewers.

Billy Treacy (amongst other things, film editor) chooses the incidental music to accompany the episode. The music he chooses in the end is often from Two Steps from Hell, AudioMachine and X-Ray Dog, all three of which's music was chosen throughout the second and third series.

The majority of Series One was improvised but loosely based on storylines written by Billy Treacy. Jaime Carroll wrote the finale "Dark Revelations" due to the appearance of his evil Agent Mortis character. The 2009 Specials were again based on scripts and improvisation. The future of the show, however, was heavily written with each episode following an indepth script with various story arcs for all the main characters. The third series was strongly based on an idea by Treacy, but all six episodes were written by Carroll.

Jaime Carroll has also commissioned a full set of audio adventures which are currently in production with Wave 1 consisting of two adventures based on Series One, and a usally forgotten third audio. A clip from each of the three audios were released on WellBillt Extra. As of 21st April 2016, none of the full audios, nor any conformation of other ones, have been released

There have been a few spin off series and episodes of Time Agent that were never completed, or ditched for no explainable reason. One of these, "The Lone Flower Alien" was released as a "deleted" episode on YouTube.

Below is a list of the crew that work on Time Agent and their respective episodes.

Jaime Carroll has stated that him and Billy Treacy "have a few things planned for release" and "other merchandise planned", in relation to Time Agent.[7][6]

On 23 August 2012, a video was posted to Billy Treacy's second channel, entitled "Time Agent OST (2009-2010)", featuring original music from the 2009 Specials and the second series of Time Agent.[8] When questioned about a release of the soundtrack, Carroll stated that if the demand is high, then there's a possibility of the official release.[9]

In 2009, Time Agent placed second on the "Top Ten Fan Films of the Noughties", a competition in which people voted for their favourite fan films released between the years 2000—2009. The winning fan film was "Fire and Ice", part of the Doctor Who 2009 project.

Retrieved from "https://dwexpanded.fandom.com/wiki/Time_Agent?oldid=40927"
Community content is available under CC-BY-SA unless otherwise noted.